An exciting new addition for the ‘City of Murals’

After 18 long years there is a finally a new Mural going up in downtown Steubenville.  In 1986 the Mural project began with the creation of the mural entitled ‘Market Street’ and grew over the next 11 years.  The murals were hugely popular and have drawn many visitors to the city from all over.  In the years following, numerous murals have been restored and unfortunately some have been lost due to the demolishing of the buildings on which they were painted, but no additions.

So now it is very exciting to have a new mural underway.  This mural will depict the War Department Telegraph Office in the Civil War with President Abraham Lincoln, Edwin McMasters Stanton, his Secretary of War and Steubenville native, and David Homer Bates, Lincoln’s telegraph operator during the war, also a Steubenville native.

The artist is Ruston Baker from Millersburg, Ohio.  ‘Rusty’ has painted many murals as well as other works and is renowned for his artistic talent.

The mural is on a building owned by Tri-State Printing which is located in the 100 block of North 3rd Street and is visible from the parking area and drive-thru of PNC Bank. It is fascinating to watch this larger than life historic scene take shape.  Feel free to come by and see for yourself!

Watch for the date and time of the Dedication Ceremony which will be announced. 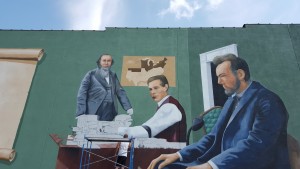 Your ticket for the: An exciting new addition for the ‘City of Murals’

An exciting new addition for the ‘City of Murals’