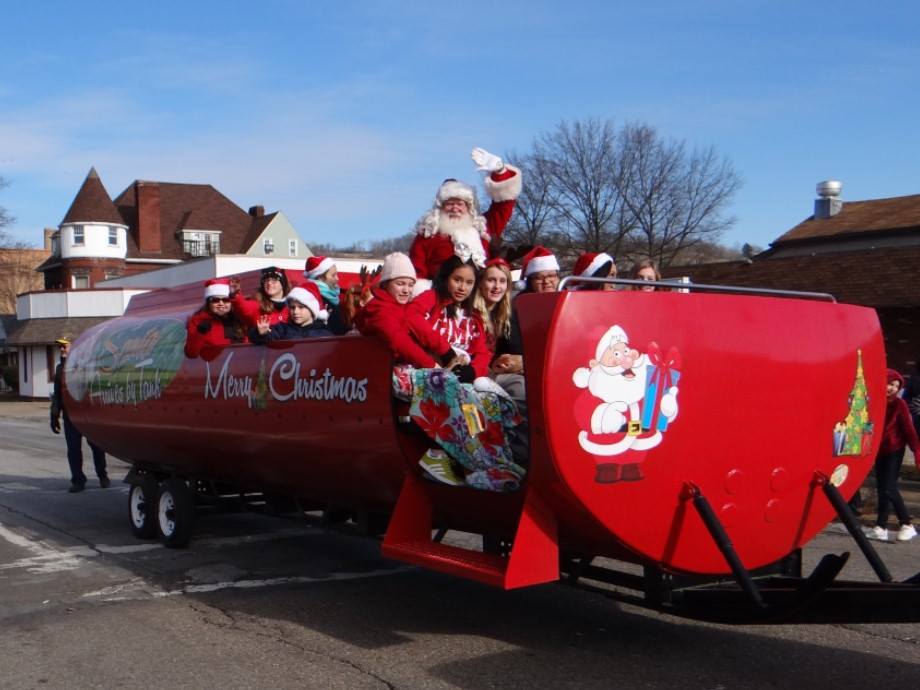 Preparations for the Eastern Gateway Community College Sights and Sounds of Christmas Parade to be held on Dec. 4th are underway in Steubenville.

“I’m so grateful to have it back,” exclaims Mary Snyder of the Steubenville Visitor Center. “Having to cancel it last year was so disappointing.”

Snyder and the other staff and volunteers are busy making the return of the parade a highlight of the holiday season in Steubenville.

“There will be over 70 units, including floats, vehicles, dance troupes and five bands,” Snyder added. “It won’t be televised this year, so we expect a bigger turnout along the streets to view the parade.”

The planning started back in September when the invitations to participate were sent out. Snyder collects the information on each unit and arranges the lineup so that each one can be best viewed. Days before, meetings are held to help the participants know where to get into the parade line and flyers are left at shops and residences along Fourth Street to be sure the street is clear of vehicles that morning.

Volunteers from the Lions Club, members of Amateur Radio Operators of TERA (Tri-county Emergency Radio Association), and Historic Fort Steuben will be on site at 8:30 am to close off the streets and put out the numbered cones indicating parade placement.

“The lineup starts at Ross Street and will go down to North Street,” said Jerry Barilla, President of Historic Fort Steuben and the Visitor Center and current Mayor of the city.

“The units arriving at 10:30 am in shifts until they are all ready to go when the parade actually starts at noon. Steubenville High School graciously opens its doors for the parade participants to use the restrooms and get warm while waiting for the event to start.”

Barilla is enthusiastic about this year’s parade. “A parade is an opportunity to bring everyone together for a positive experience. It’s the spirit of Christmas that can be seen and heard!”

Many of the familiar entries from past parades will be on Fourth Street that Saturday including the Osiris Tin Lizzies, the Boys Scouts, the Jefferson County Humane Society canines, and the City of Steubenville Fire trucks. New entries will come from Turn 3 Horse Training with horses, Friends of Beatty Park, and Eastern Construction & Excavating who promise to surprise everyone again with something special. A Firetruck Train will be added to Historic Fort Steuben’s entry this year. And once again, Santa will ride into town in a special Tanker Sleigh courtesy of Steel Valley Tanks.

“Our Grand Marshal will be Richard Pflug and his wife, Heidi. Richard was a long-time businessman in the city and a quiet donor to many organizations,” said Barilla. “Trinity Health System sponsored the beautiful horse-drawn carriage they will be riding in. And we are again grateful to Eastern Gateway Community College for being the title sponsor of the parade.”

Finally, Barilla encouraged everyone to head over to Fort Steuben Park where the Advent Market and many other activities will be occurring as he said, “It is THE most wonderful time of year!” 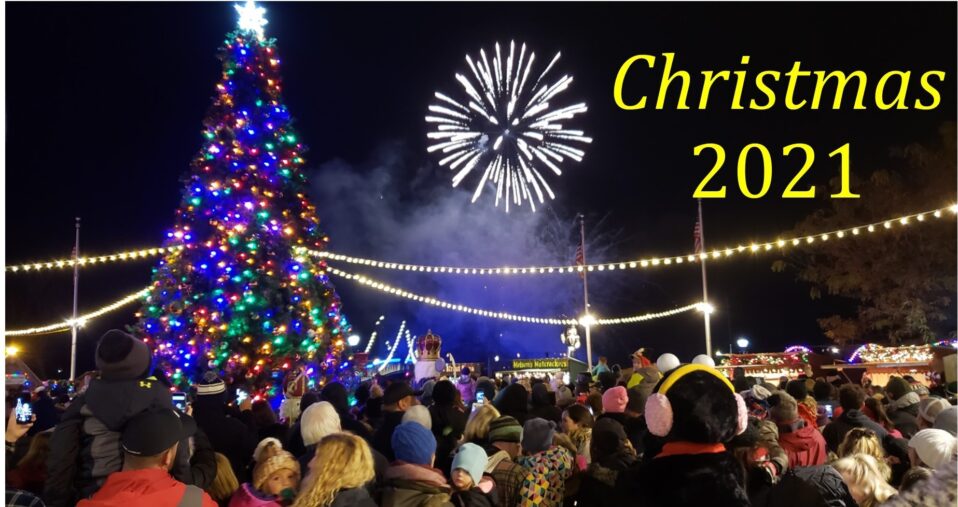 Take a look at what is happening this Christmas season in Steubenville!

For further details please visit the websites listed in the flyer below. 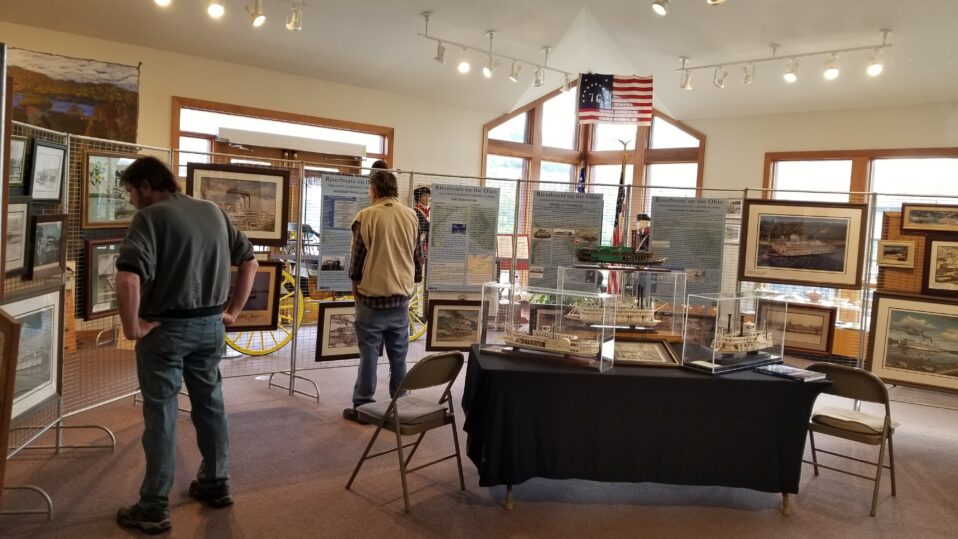 “From Canoes to Showboats: A Century of Change” – an exhibit on the history, effects and stories of the Ohio River and the characters that became legendary – will open on Sunday, October 3 at the Visitor Center of Historic Fort Steuben and run through October 17.

“The river was the major highway and life-line to the outside world in the early years,” explained Historic Fort Steuben Executive Director Paul Zuros. “The riverboats connected all the major river communities and made it possible to bring Steubenville to the world – and the world to Steubenville.”

The exhibit was originally developed with a grant from the Ohio Humanities Council, a state affiliate of the National Endowment for the Humanities, and has been added to over the last four years. The display consists of educational panels, models and information highlighting Steubenville and the Upper Ohio Valley.

In addition, over 25 works of art on loan from the personal collection of George Hines of New Cumberland, WV feature prints of important Riverboats that have traveled in this area.

“Steubenville first and foremost was a river town and it is because of the river we flourished,” added Zuros. “We often take this great part of our local geography and history for granted.” 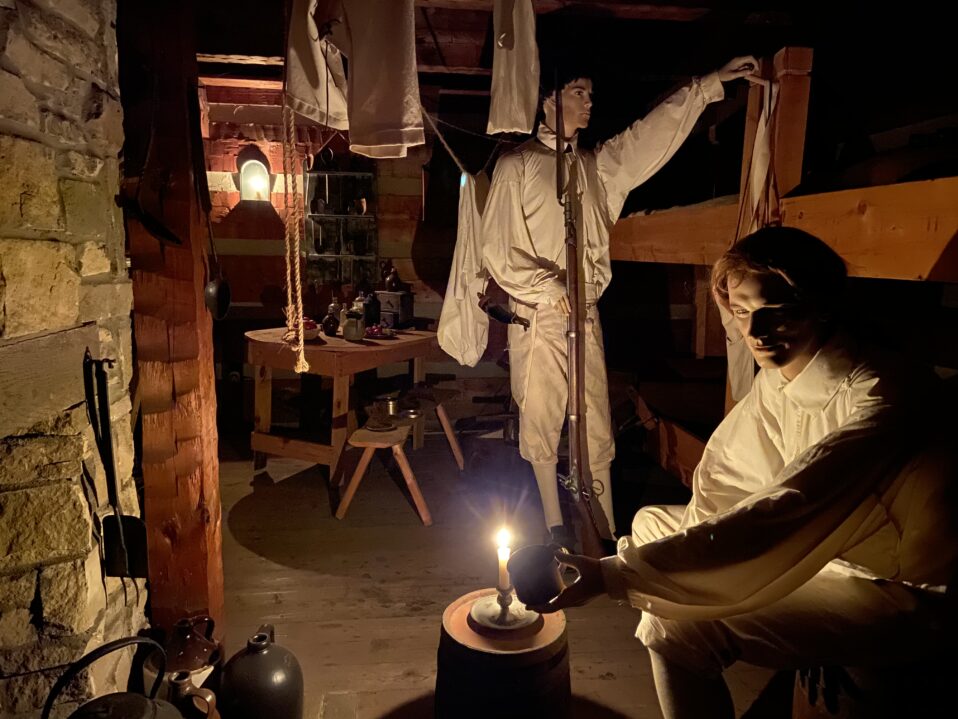 Visitors to Historic Fort Steuben this October will have the opportunity to have a unique experience at the Fort akin to what the soldiers and settlers experienced during the dark nights on the frontier.

In the fall of 1786 at historic Fort Steuben, there was nothing beyond the stockade but dark wilderness. The soldiers and surveyors had only the light of their fires and lanterns in which to keep watch.

On October 2 and 9 starting at 7:00pm, an open house will be held at Historic Fort Steuben and visitors will be welcome to visit after dark for some afterhours history. Participants will learn about the fort, its role in the settling and surveying of the Northwest Territory and what life was like on the Ohio frontier in the late 18th century. The buildings in the fort will be open with guides stationed in each one to interact with visitors and share some history.  After visiting touring the Fort, visitors will be welcome to sit by the campfire to listen to stories and enjoy some refreshments. 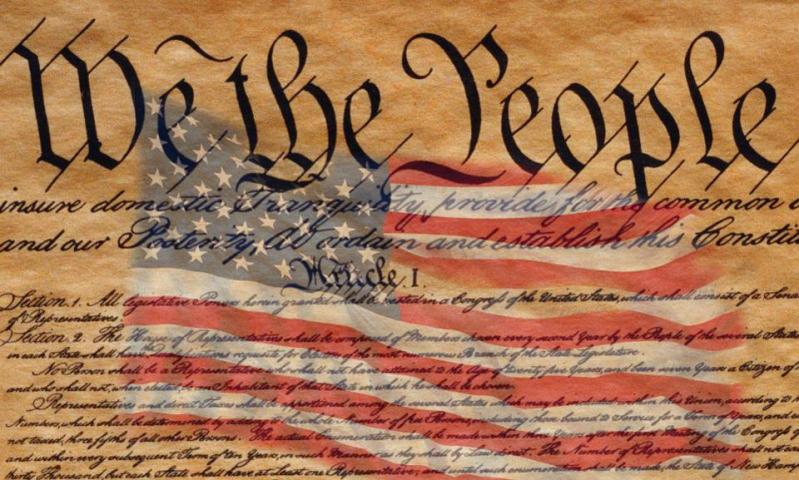 The exhibit highlights the signers, the details and the history of America’s founding document which is commemorated every year on September 17, Constitution Day. Included in the exhibit is The Bill of Rights & You, created by the National Archives Traveling Exhibits Service.

“The Constitution of the United States is a document that everyone should be familiar with explained Paul Zuros, Executive Director of Historic Fort Steuben and the Visitor Center. “Our objective is to give all citizens, young and old, a better understanding of the origins and significance of the Constitution and its relevance in our society 21st century.”

Zuros noted that learning what the founders discussed, debated, and argued over as they decided how the new nation would govern itself is important for appreciating the rights and privileges we have today.

“Our exhibit gives information on the Constitution and on some of those people influential in its writing. The video A More Perfect Union demonstrates the often volatile debates that raged as the delegates tried to balance the concerns of each region.”

The exhibit includes a display on the Bill of Rights – the first ten amendments – that ensured the rights that weren’t detailed in the original document.

“The framers of the Constitution realized that as the country grew, the government would need to adapt and so designed a way to do it through the amendment process. Their foresight prevented the violence that often occurred in other nations when changes were necessary,” he added. “Proposing an amendment is easy, but two-thirds of both houses of Congress and three-fourths of the states must approve the change before it is added to the Constitution. That is why, out of more than 11,000 attempts to amend the Constitution, only 27 have been successful.”

The exhibit also offers visitors the opportunity to sign a replica of the Constitution and receive a free pocket Constitution. Puzzles, information and quiz sheets are available to take home as well.

Constitution Day was the brainchild of Senator Robert Byrd of West Virginia who always carried a copy of the Constitution with him and was emphatic about making Constitution Day events a requirement for organizations that receive federal funds.

Individuals, families, school groups and civic organizations are invited to visit the free exhibit that runs until September 18th. The Visitor Center is located at 120 S. 3rd Street in Steubenville and open from 10-4, Monday through Saturday, and 11-4 on Sunday. For more information call 740-283-1787.

Due to popular demand, Adult Education Classes will be held at historic Fort Steuben on September 13-14-15.  The class will be held from 6-8pm in the Conference Room at the Visitors Center.

“Building off of our popular Summer Youth Program, Staff at Fort Steuben over the years have received many requests from adults who wanted to take part in the program.” Explained Paul Zuros, Executive Director at Historic Fort Steuben. “Now adults can be a part of the fun originally only offered to youth.”

Class attendees will cover several local history topics over the course of the program.  Special guest and local author Alan Fitzpatrick will speak on Native American history and culture. Other topics will include the surveying and settlement of the Northwest Territory, the military experiences at the Fort, the Lewis and Clark expedition and the work of archaeologists. Also, they will have a chance to learn about the local creatures in the Ohio River as well as march with Baron von Steuben.

Applications for the 2021 Adult Education Class at Historic Fort Steuben are now being accepted. Applications are available at Fort Steuben, as well as online at www.oldfortsteuben.com. Class sizes are limited, and space is on a first come first serve basis.

The program runs from 6pm to 8pm Monday September 13, Tuesday September 14, and Wednesday September 15.  Cost for the program will be $45 total or $15 per day. Pre-registration is required.  For more information, call 740-283-1787. Historic Fort Steuben is located at 120 S. 3rd Street in Steubenville.

Photo: Students sift for artifacts in the archaeology dig during the Summer Youth Educational Program at Historic Fort Steuben. 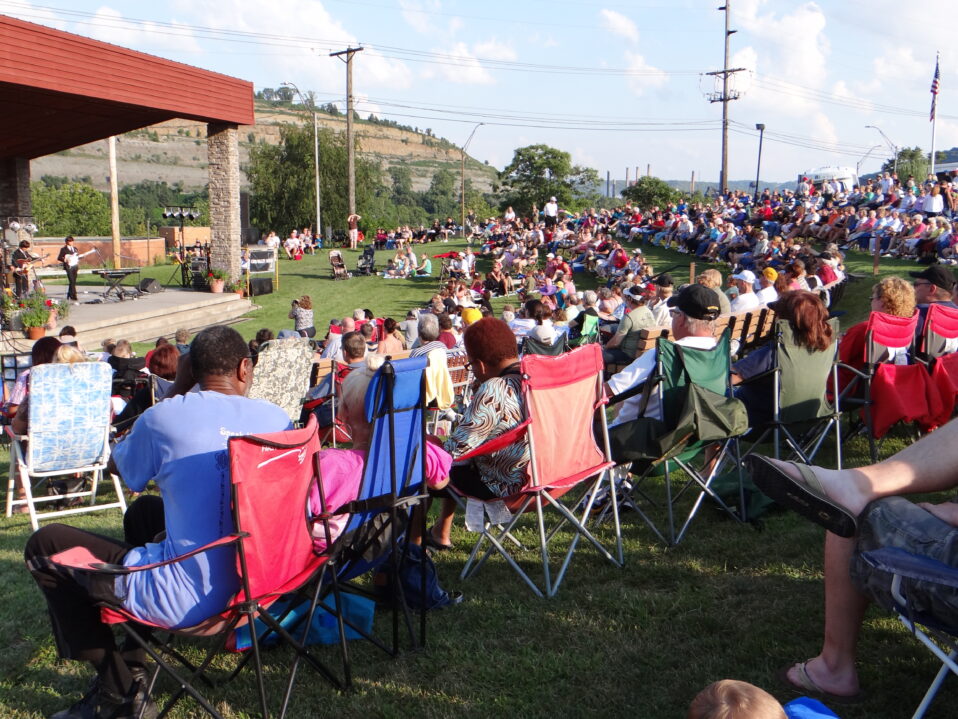 Due to so many rain cancellations this season for the 2021 Fort Steuben Concert Series, a special ‘make-up’ concert has been scheduled for Labor Day at the Berkman Amphitheater, 120 South Third Street, Steubenville. The Fossils and SILVER SPRINGS: FLEETWOOD MAC EXPERIENCE will be performing beginning at 7:00pm September 6th.

The Fossils recreate the music from the 70s to today and originals as well. They aim to offer the Best Harmonies in the Valley with the talents of Mary Blake, M.D. Hall and Harry Yeager.

Food vendors will also be available.

So come end the ‘summer season’ on Labor Day with tunes and treats at Fort Steuben Park!

As always, no admission is charged, but a free will offering will be collected at intermission.

The 2020 Economic Impact of Tourism in Jefferson County, Ohio as well as the Steubenville/Jefferson County Visitor Center Annual Report (Jan 1-Dec. 31, 2020) have been released. 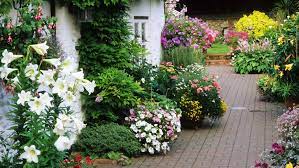 Ohio gardeners, rejoice! The Steubenville Flower Cooperative has scheduled its second annual Garden Tour for Saturday, August 14th from 10am to 3pm.

“Last year’s event was great success with rave reviews and I’m excited that this year we have more host gardens and more time to view them all,” explained Alex Renn, Founder, Steubenville Flower Cooperative.

The free event requires registration and is well choreographed to allow visitors to rotate through the locations, preventing any one site from getting overwhelmed. Each attendee checks in and receives a map with directions to their starting garden

“The tour is a fun thing to do on a Saturday, but I hope it also inspires people to start their own gardens said Renn.

And visitors from last year’s tour agreed as one commented, “It was really cool to be able to see people’s gardens and talk to them about it. It was nice to hear about people’s passion for gardening and how much time they devote to their gardens. Hearing about how they started helped me feel more comfortable that I may be able to start my own garden one day.”