Steubenville fondly remembers celebrity Dean Martin (born Dino Crocetti), known for his smash-hit singing, weekly TV shows, prolific movies, and popular stage appearances.  Dino was born in Steubenville on June 7, 1917, and spent his boyhood growing up in Steubenville until he left at age seventeen to pursue his dreams in the world of entertainment. 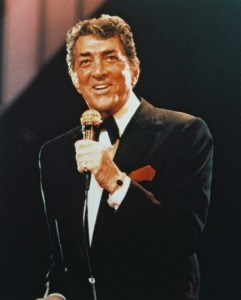 Dino Crocetti was the son of Italian immigrants.  His father was a barber, and he had one older brother, Bill.  Dino spoke only Italian until he started school.  He attended Grant Elementary School, and dropped out of Steubenville High School in the tenth grade and began working in one of the local steel mills.  He fought as a boxer under the name of Kid Crochet and worked a variety of jobs in local clubs.

Dino started his entertainment career singing.  At age seventeen he expanded his singing gigs to Ohio night clubs outside of his hometown and eventually met success singing in the clubs in New York City.  In 1940, he changed his name to Dean Martin.

In 1944, Dean Martin secured a regular fifteen-minute radio program broadcast in New York.  Two years later his single “Which Way Did My Heart Go?” was a hit.  That same year, Dean Martin met comedy partner Jerry Lewis while performing in Atlantic City. The duo became popular for their comedy routines, with Martin playing the straight man and Lewis playing the fool.  Their partnership lasted for ten years, during which they made sixteen movies together.

Dean Martin resumed his singing career. “That’s Amore” was hugely successful in 1953.  The year 1958 was extremely productive, as he acted in his first drama The Young Lions, began hosting specials for NBC, was a popular entertainer  at the Sands Hotel in Las Vegas, and released his song “Volare”.

The following year saw the founding of the “Rat Pack” with their movies Some Came Running.

Actually, the Martin-Sinatra-Davis-Lawford-Bishop group referred to themselves as “The Summit” or “The Clan” and never as “The Rat Pack”, although this has remained their identity in the popular imagination. The men made films together, formed an important part of the Hollywood social scene in those years, and were politically influential (through Lawford’s marriage to Patricia Kennedy, sister of President John F. Kennedy).

In 1964, Martin’s “Everybody Loves Somebody” topped the charts.  The following year, The Dean Martin Show began as a weekly variety show that ran for eight years.  Dean Martin made his fifty-fifth film, Cannonball Run Part II, in 1984.

Martin was diagnosed with lung cancer at Cedars Sinai Medical Center in September 1993, and in early 1995 retired from public life.  He died of acute respiratory failure resulting from emphysema at his Beverly Hills home on Christmas morning 1995, at the age of 78. The lights of the Las Vegas Strip were dimmed in his honor.

For additional and regularly updated information visit  www.deanmartinsteubenville.com   or contact the Steubenville/Jefferson County Visitor Center by phone at 740.283.4935 or email at info@visitsteubenville.com.

Your ticket for the: Dean Martin