Edwin McMasters Stanton was the Secretary of War in the Lincoln Administration during the American Civil War.

Edwin Stanton was born on December 19, 1814, in Steubenville, Ohio.  His father was a member of the Society of Friends, and his mother was a Methodist.  They both despised slavery and instilled this belief in their son.  At the age of twelve Stanton joined the Methodist Church.  Both of Stanton’s parents stressed education, but Stanton’s father died in 1827.  Stanton was forced to leave school to help support his mother.  He assisted his mother in operating a general store in Steubenville.  In 1828, Stanton became a clerk at a local bookstore.  Stanton tutored himself by reading many of the books in the store.  In 1831, he applied to and was accepted as a student at Kenyon College.  His time at Kenyon convinced Stanton to join the Episcopal Church.  Stanton could not afford the tuition at Kenyon and left school in 1832.

He became a clerk in a bookstore in Columbus, Ohio, where he also began to study law.  He returned to Steubenville in 1833, where he continued his studies.  In 1835, he passed the bar examination.  He argued his first case in court before he reached the age of twenty-one.

Stanton joined a law firm in Cadiz, Ohio, and local voters elected him to be the Harrison County prosecuting attorney in 1837.

In 1839, he returned to Steubenville, where he opened a law practice with Benjamin Tappan.  In 1842, the Ohio legislature appointed Stanton to be the reporter to the Ohio Supreme Court.  Steubenville residents selected him to be city solicitor in 1847. Stanton prosecuted the community’s criminal element with energy and thus effectively cleaned up the town.

In 1849, Stanton participated in the most famous case of his career.  It was called Pennsylvania v. the Wheeling and Belmont Bridge Company. Stanton represented Pennsylvania in the case and claimed that the bridge company had constructed a bridge across the Ohio River that impeded steamboat traffic. The United States Supreme Court ruled in Stanton’s favor and ordered the company to either remove the bridge or to alter it.  Stanton also represented Cyrus McCormick when he sued a competitor for stealing his reaper design.  One of Stanton’s co-attorneys was Abraham Lincoln.  Stanton won this case as well.  He also represented the federal government in land claim disputes in California.

In recognition of Stanton’s work in this and other cases, President James Buchanan appointed him to be Attorney General of the United States in December 1860.  Lincoln took office in March 1861.  Stanton urged President Buchanan to keep the nation together through force if necessary.  But the president refused to act as Southern states seceded from the Union. 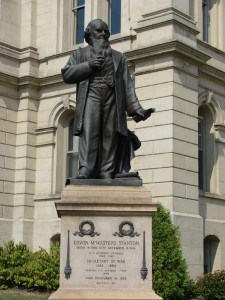 Politically, Stanton had been a long time supporter of the Democratic Party.  He was certain that Abraham Lincoln’s election to the presidency would result in war.  Stanton, however, supported the new Republican president’s actions to keep the nation united.  He even encouraged Lincoln to arm the slaves.  Following the resignation of Simon Cameron as Secretary of War in January 1862, Lincoln appointed Stanton to the office.  Stanton accepted and became one of Lincoln’s closest advisors during the American Civil War.
Lincoln respected Stanton’s opinion and took many of his suggestions to heart.  Lincoln once stated, “So great is my confidence in Stanton’s judgment and patriotism that I never wish to take an important step without first consulting him”.  It was Stanton who suggested that Lincoln make Ulysses S. Grant commander of all Union armies.

When Lincoln died in April 1865, Stanton was regarded as the informal president of the United States until Andrew Johnson was sworn into office.

Stanton did not have a close relationship with Andrew Johnson.  Stanton strongly supported civil rights legislation and Johnson was much more cautious on this issue.  Johnson demanded Stanton’s resignation, but the Secretary of War refused.

Johnson fired Stanton in 1867.  Johnson’s actions angered many members of the Congress of the United States.  Congress had approved the Tenure of Office Act, which required the president to have Congressional approval before removing cabinet officers.  The act had been designed to protect Stanton.  The House of Representatives impeached the president.  The Senate then debated whether or not to remove Johnson from office.  In a vote of thirty-five to remove the president and nineteen opposed, Johnson remained president.  The vote fell one vote short of having the necessary number to remove Johnson.  Hearing of the Senate’s decision, Stanton immediately resigned as Secretary of War on May 26, 1868.

Stanton returned to private life but remained active in politics.  He actively campaigned for Ulysses S. Grant in the presidential election of 1868.  Upon taking office in 1869, Grant appointed Stanton to the United States Supreme Court.  Stanton died on December 24, 1869, just four days after the appointment.

In the fall of 2015 a new mural was dedicated in Steubenville entitled “Civil War Telegraph Office” depicting Abraham Lincoln, the 16th President of the United States along with Edwin M. Stanton, his Secretary of War and David Homer Bates, his telegraph operator (also a Steubenville native).  This is one of the 23 murals making up Steubenville’s City of Murals.