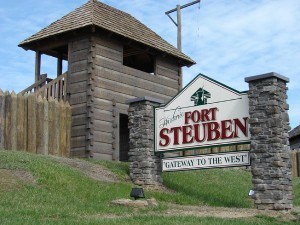 This historic fort originally was built in 1786-1787 by the 1st American Regiment to protect government surveyors from hostile Indians as they laid out the first seven ranges of the Northwest Territory.  The fort was named after George Washington’s great drillmaster, Baron von Steuben.

Fort Steuben opened the Northwest Territory which became Ohio, Indiana, Illinois, Michigan and Wisconsin.  The town that followed, Steubenville, Ohio, took its name from this fort.

A visit to Fort Steuben is an opportunity to see what everyday life was like for the early American soldiers – both the enlisted men and officers – on the frontier.  Exhibits on the life of the Native American tribes are also on display.

From the officers’ quarters to the blacksmith’s shop, the herb garden and the hospital, Historic Fort Steuben allows you to step back 200 years!