The concert is a DOO-WOP concert featuring the well known and loved ‘Marcels’.  The Marcels are as advertised, the guys who put the “Bomp” in the “Bomp-A-Bomp” back in 1961 when their first recording “Blue Moon” sold over two and a half million copies.    They have had three record albums and numerous hit singles, with sales in the millions.

They also recorded the theme song, “The Greatest Love” for the motion picture ‘The Interns’ and appeared with Chubby Checker in the film ‘Twist Around the Clock’.   Their signature song, “Blue Moon” has been used in at least four major motion pictures and various TV shows, such as Sha Na Na, Cheers, Moonlighting, Laverne & Shirley, Happy Days, etc.

The Marcels, featuring Jules Hopson, Kenny Mitchell, Richard Harris and Ted “Reno” Smith bring dynamic energy to the stage with their hits as well as their “Salute to The Jukebox Giants”.

It will be a wonderful way to celebrate Memorial Day, so mark your calendar and join “The Marcels” as they ‘sing’ us back to the past with a fun filled,  rockin’ good show. 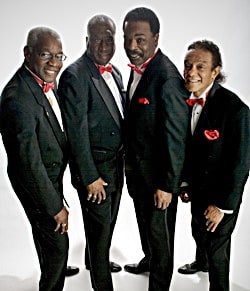