This year marks the 100th year anniversary of the passage of the Nineteenth Amendment to the United States Constitution extending voting rights to American women.  To commemorate this achievement, the Women’s History Month exhibit at Historic Fort Steuben will feature information on the struggles and successes of those who worked for women’s suffrage.

Something we take for granted today was not a fact when our national government was first formed.  When the outspoken Abigail Adams wrote to her husband John at the Constitutional Convention to ‘remember the ladies’, he countered that the Declaration of Independence stated that ‘all men were created equal’.  Abigail was not the only one to receive such a response and the efforts to obtain equal voting rights continued for over 130 years!

Many of the suffragettes, as they were called, were also active in the movement to end slavery which was finally achieved with the 13th Amendment in 1865.  Many of the methods used to promote abolition were then applied to the equal voting rights efforts.

These women and their male supporters wrote letters, articles and pamphlets, published magazines, organized parades and protests, and traveled all over the country giving lectures and meeting with influential leaders.  Remember, this was in the days before automobiles, airplanes, telephones and computers.  Their dedication to the cause was remarkable.

Voting was only part of the issue.  Women could not own property in their own name if they were married.  They could not leave an abusive husband who had all the property in his name.  As a result, many of the suffragettes remained single so they could devote all their resources to the movement.

The Nineteenth Amendment was passed by Congress in 1919 and ratified in 1920.

The Women’s History Month Exhibit will also feature and recognize local and state women and will have a display of First Lady Dolls.

Visitors are invited to view the exhibit at Fort Steuben Visitor Center, 120 South 3rd Street, Steubenville. The exhibit runs from March 11th to the 22nd, Monday-Friday from 10am to 4pm or by appointment.

Time for another Walk around Historic Downtown

The Valentine’s Day Walk was so successful and everyone had so much fun, and now it is time to celebrate another fun day…. St Patrick’s Day.

The Steubenville Shamrock Walk will take place on Saturday, March 9th from Noon to 4:00pm.

Along the walk each business will be handing out a green treat or gift and will stamp your ticket, which you will use to enter the drawing at the Visitor Center for a gift card to Bennigan’s!

Tickets are $20 and may be purchased at the Fort Steuben Visitor Center. Hours at the Visitor Center are 10am to 4pm daily. You will be supplied a map of the participating businesses when you purchase your ticket(s).  Only 30 tickets will be sold so your odds of winning are very good!

A portion of the proceeds will go to support the educational programs at Historic Fort Steuben. 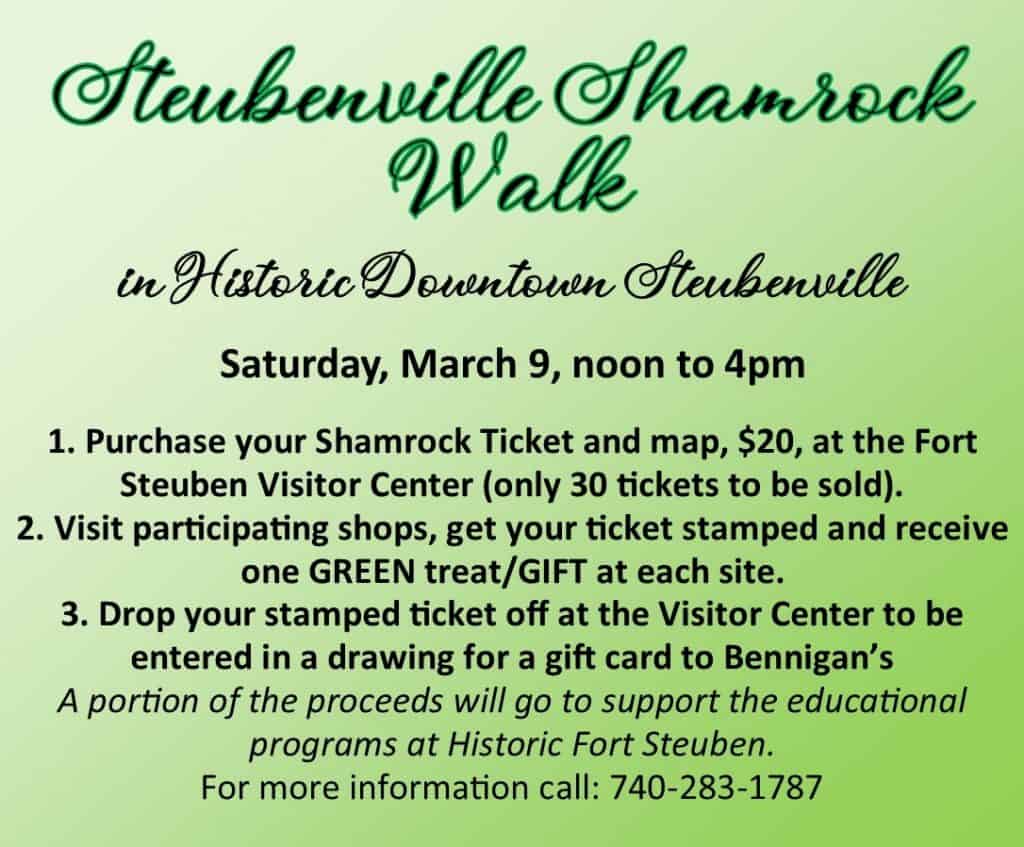 Your ticket for the: Time for another Walk around Historic Downtown

Time for another Walk around Historic Downtown